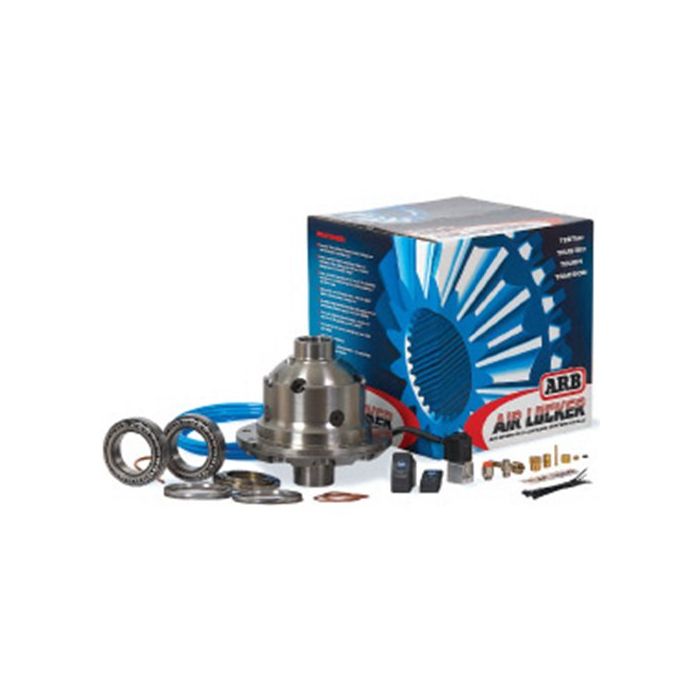 And here is where the ARB Air Locker presents itself as the ultimate differential solution. The advantage of the ARB Air Locker lies in the pneumatically operated locking system inside the differential. When activated by a 12 volt air compressor, the Air Locker prevents the differential gears from rotating and therefore prevents the axle shafts from turning independently of each other. With both wheels tied directly to the rotation of the ring gear the vehicle maintains maximum possible traction at all times. When unlocked, it operates just like conventional "open" differentials.  When installed with an ARB air compressor (see Related Products below), the locker system is supplied as a complete kit which contains all of the parts necessary for proper installation, including industrial grade control switches, air lines and fittings. ARB offers three compressor models suitable for Air Locker operation. A dedicated air activation system is available which is extremely durable and compact. Alternatively a larger compressor can be specified, which is also perfect for inflating tires, air mattresses and a host of other applications where compressed air is required.


There are three main types of differentials, each with their own advantages and disadvantages:  open, limited slip, and automatic locking.  An open differential is best suited for vehicles used for day to day driving on the street under fair weather.  They tend to be the smoothest running differential, but unfortunately they lack the necessary traction capabilities for anything but dry pavement.  This is mostly due to the wheels being "disconnected" from one another, which causes only one wheel to spin when traction is most needed.  A limited slip differential is a relatively newer concept on modern vehicles which offers traction improvements over an open differential, but typically will still not engage both wheels at the same time when traction is most needed.  And finally, an automatic locking differential provides equal traction to both tires all the time, which favors well for off-road use, but will cause increased wear on the vehicle and tires for street use and are typically considerably noisy.